The suburban landscape’s uniform houses, brown picket fences, and freshly mowed lawns defined my summers. The grassy lawns were the main source of greenery in the area and were paired with a solitary maple tree that was placed at the foot of every house. Staring out at these small trees, they did not seem to inspire a sense of national pride. Unlike Alexander Muir, I was not compelled to write an anthem upon looking at my thin maple tree. Instead, I believed that these trees were planted to signal to my primarily immigrant neighbourhood that this was Canada—or was it?

Given the solitary nature of our tree, my sisters and I were afforded little shade from the sweltering heat, which forced our retreat into the living room. Though summers were promoted by our teachers as a time for venturing outdoors, we often planted ourselves in front of the television. Here, we were presented with the occasional commercial between our programs that advertised our nation’s natural beauty. More specifically, we learned about the idea of the great outdoors and our “Canadian backyard”–one characterized by thousands of trees that stretched for miles, lakes, camping, fishing, sunsets, and the echoes of loons. In contrast, the view from my living room window offered the sight of a rusting play-set.

Closing my eyes to remember my room without a view, my heart is warmed to have the opportunity to work in a location where nature shines. As I look outside now at Bark Lake, the dark greens, yellows, reds and browns of the surrounding setting affords me the chance to experience a small piece of the Canadian backyard. Though I am still learning the ins and outs of surviving outdoors, the ability to be outside has connected me with my national identity more so than that maple tree outside my house. So today, this girl, whose faith in the beauty of her nation and province was restored by her job, encourages you all to get outside and celebrate our country’s natural splendour by taking in a breath of fresh mountain air, diving into a freshwater lake, or pitching your first tent. Happy Canada Day! 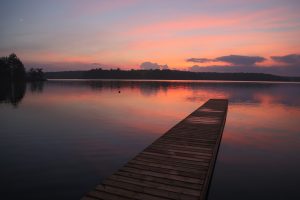 We are passionate about making leaders, building character, and adventure based experiences, in this beautiful, wild place!

Looks like winter is just around the corner! This

One of our new interpretive signs on Lakota Trail.

Fall colours are out in the Highlands. Hope every

What does the fox say? Listen carefully and you'l